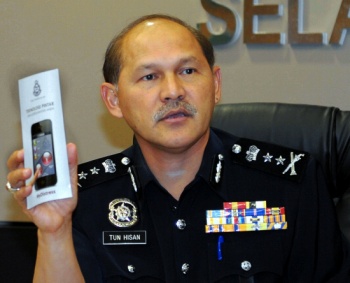 SHAH ALAM (March 22, 2012): The application of the smart phone signal ‘distress call’ system or an emergency call, which was introduced by the Selangor police contingent in August last year, could speed up police response to the crime scene, in less than eight minutes.

Selangor police chief Datuk Tun Hisan Tun Hamzah said this was proven when the police managed to arrive at the scene of the crime in two separate incidents, rescue the victims, arrest the suspects and recover the properties.

In the first case, a woman activated an emergency calling system via her smart phone when four local men armed with parangs tried to rob her in Petaling Jaya last year.

The incident occurred at a road-shoulder in Sungai Way at 12.50am, on Sept 16.

“It was the first success with the system when the police arrived at the scene within five minutes and nabbed four men and rescue the woman,” he told Bernama.

Tun Hisan said in the second incident, a month later, a man saw four men armed with parangs break into his neighbour’s house. He pressed the emergency call.

The police arrived at the scene in six minutes and succeeded in arresting the criminals, he said.

Tun Hisan said in the implementation of an emergency call, the police only received two signals involving a crime, while some signals were just an attempt by the public to test the effectiveness of the police response as the system was still new, with Selangor being the pilot project for such programme to combat crime.

“The system is very effective because the police can detect the victim who activates it within a distance of two metres. The force has also received positive feedback from the public,” he added.

He said the system was an initiative by the police, with cooperation by the Convep Mobilogy Sdn Bhd, to increase participation from the public to prevent crime, in line with the National Key Result Areas (NKRA).

In conjunction with the 205th Police Day celebrations, Tun Hisan said the distress call system could engage 7.4 million people of Selangor to assist the police in the state, which has 13,000 personnel.

He said the system could be activated via a smart phone and SOS or emergency signal that would be received by the Selangor Police Control Centre, together with a user name and location.

The system can be downloaded at https://mydistress.net/main for smart phone Blackberry owners, Iphone, Android and Java and so far, a total of 70,108 people in Selangor have registered with the system.

“It should be noted that this system must be activated to alert the police of a crime and not to fool the authorities,” he said.

Besides the distress call, the Selangor police have also introduced a method to approach the public through calling cards whereby, policemen in a sector introduce themselves by giving a card bearing their relevant particulars, to contact in the event of an emergency.

“Once a week, the personnel in charge of each sector would visit the area and meet the local community under their supervision,” he said.

He said so far, a total of 419,523 calling cards were distributed to the people of Selangor.

He said Selangor police also introduced ‘Ops Payung’, whereby uniformed personnel would be placed in a strategic area, and provided with a blue umbrella and a table to serve as a mobile police station to increase police presence in ‘crime hot spots’.

Tun Hisan said distress call, calling cards and ‘Ops Payung’ were proactive steps in transforming police service to the public as a means of an interpersonal level of society to help the police reduce the crime rate. — Bernama