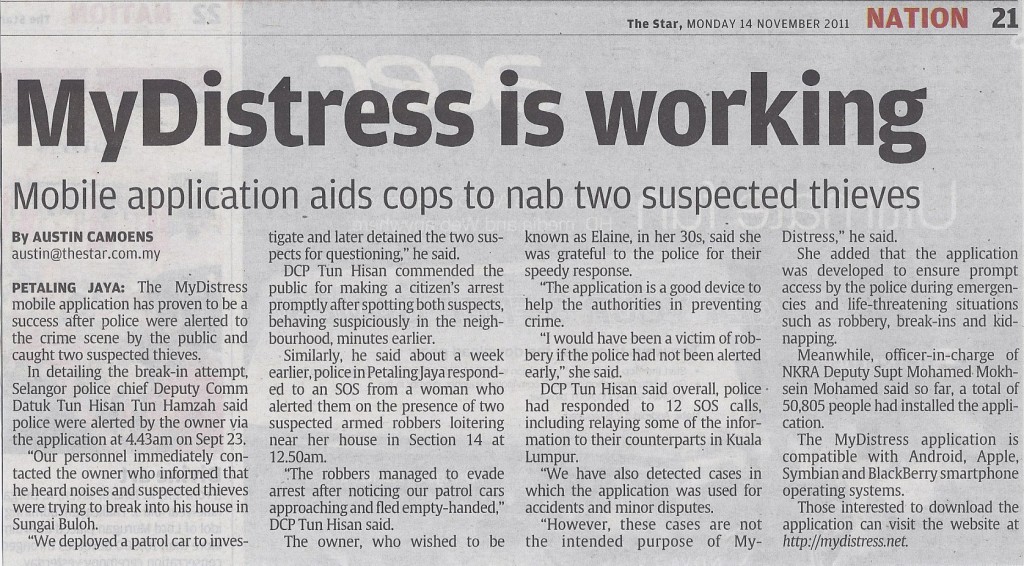 PETALING JAYA: The MyDistress mobile application has proven to be a success after police were alerted to the crime scene by the public and caught two suspected thieves.

In detailing the break-in attempt, Selangor police chief Deputy Comm Datuk Tun Hisan Tun Hamzah said police were alerted by the owner via the application at 4.43am on Sept 23.

“Our personnel immediately contacted the owner who informed that he heard noises and suspected thieves were trying to break into his house in Sungai Buloh.

“We deployed a patrol car to investigate and later detained the two suspects for questioning,” he said.

DCP Tun Hisan commended the public for making a citizen’s arrest promptly after spotting both suspects, behaving suspiciously in the neighbourhood, minutes earlier.

Similarly, he said about a week earlier, police in Petaling Jaya responded to an SOS from a woman who alerted them on the presence of two suspected armed robbers loitering near her house in Section 14 at 12.50am.

The owner, who wished to be known as Elaine, in her 30s, said she was grateful to the police for their speedy response.

“The application is a good device to help the authorities in preventing crime.

“I would have been a victim of robbery if the police had not been alerted early,” she said.

DCP Tun Hisan said overall, police had responded to 12 SOS calls, including relaying some of the information to their counterparts in Kuala Lumpur.

“We have also detected cases in which the application was used for accidents and minor disputes.

“However, these cases are not the intended purpose of MyDistress,” he said.

She added that the application was developed to ensure prompt access by the police during emergencies and life-threatening situations such as robbery, break-ins and kidnapping.

Meanwhile, officer-in-charge of NKRA Deputy Supt Mohamed Mokhsein Mohamed said so far, a total of 50,805 people had installed the application.