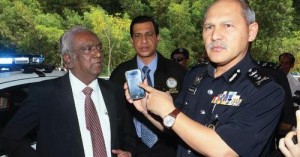 SHAH ALAM: Help from the Selangor police is now just one button away!

Through a “MyDistress” function applicable to smartphones, the public can now signal for help in emergency situations by just pressing one button on the smartphone.

The signal will immediately be routed to the control rooms of the Selangor police headquarters and eight district police stations in the State in areas considered crime hotspots.

Selangor police chief DCP Datuk Tun Hisan Tun Hamzah said the application was equipped with Global Positioning System (GPS) that will help police track the person who sent the signal to their location.

“Smartphone users can download the MyDistress application from https://mydistress.net. Just follow a few simple instructions and it will be downloaded into the smartphone,” he said at a Press conference yesterday.

“So anyone who witnesses a crime or needs police assistance in an emergency can do it quickly through the smartphone and this will shorten our response time.

“For example, if a lorry driver believes that he’s being tailed by robbers, he can press the button on the smartphone and then hide the phone in his lorry as, in case the driver is hijacked and left somewhere, we will be able to track down his lorry and hopefully arrest the robbers too.”

Tun Hisan also urged the public to use the application wisely, such as in emergency or life-threatening situations.

“Do not send out a signal when your vehicle runs out of petrol or due to a tyre puncture, unless of course you are being menaced by criminals.”

“These areas have high crime rates, and hopefully this smartphone application will result in a significant reduction in crime in these hotspots,” said Tun Hisan, adding that so far 50 police patrol cars had been equipped with the GPS system.

He said a “MyDistress” pilot project was conducted in March this year to assess its shortcomings so as to improve its application and Selangor police are now ready to implement it.

“This application is provided free for now but users might be charged RM2 per month from next year onwards.”