SHAH ALAM: Your smartphone is the SOS you need in times of danger just tap a key and the police will be able to locate you wherever you are.

Selangor police have pioneered a new application for smartphones to enable the public to have easy access to the police in high-risk situations. 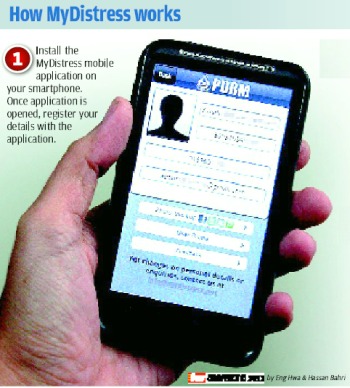 “The purpose of this device is to assist the public who may need our assistance if they face situations like being robbed, house break-ins, abducted or even kidnapped,” he said, adding that it took one year to complete the development of the application.

DSP Mohamed Mokhsein said the application was capable of transmitting the GPS coordinates of any person who had installed it in a smartphone if the distress feature had been activated.

He said the application was capable of giving an accurate location of any individual who uses it.

Police had been testing it since March to ensure it would be ready for use, DSP Mohamed Mokhsein added. 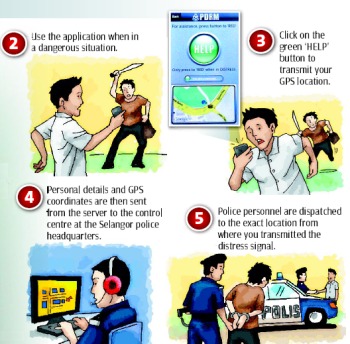 Selangor police chief Deputy Comm Datuk Tun Hisan Tun Hamzah said the application could be used for free within the eight police districts in Selangor until January next year.

“We developed this application to make it easy for the public to get police access if they are in imminent danger and to enable the police to respond fast to life and death situations.

“At the click of a button, anyone can report to us their exact location so that we can get to them as fast as possible,” he said, adding that the application was meant to be used in high-risk situations only.

The application would eventually cost RM2 monthly beginning next year, he said.

He also said 50 police patrol cars had been equipped with GPS to ensure they get to the right locations.

“We are working together with Pemandu to equip the rest of our patrol cars with GPS as well,” he said.

Anyone interested in downloading the application can visit https://mydistress.net on their smartphones.